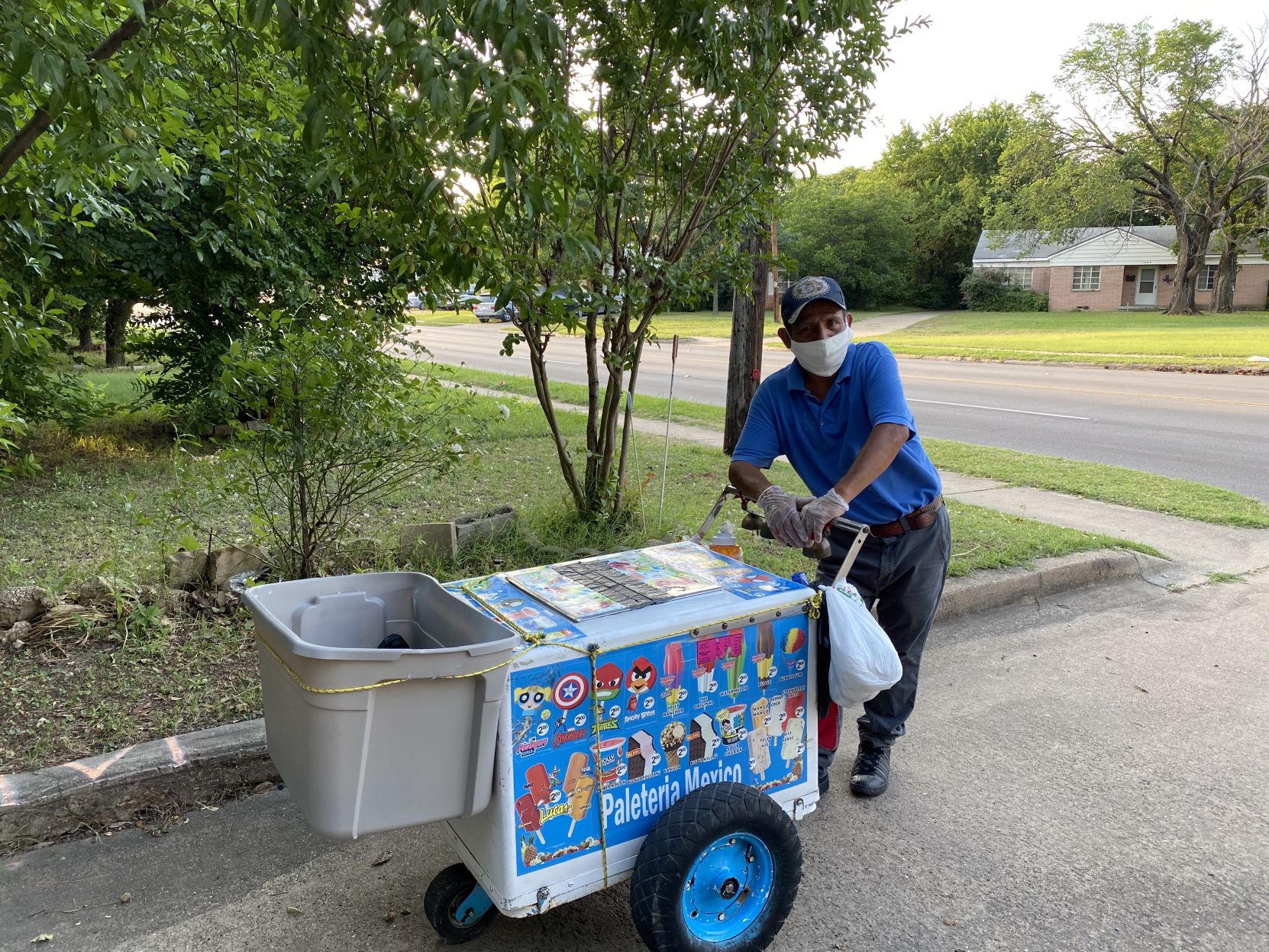 Dallas resident Pablo Abac has worked as a paletero for a decade now. Abac said he now worries how he will pay rent and help provide for his family after COVID-19 has affected his business. 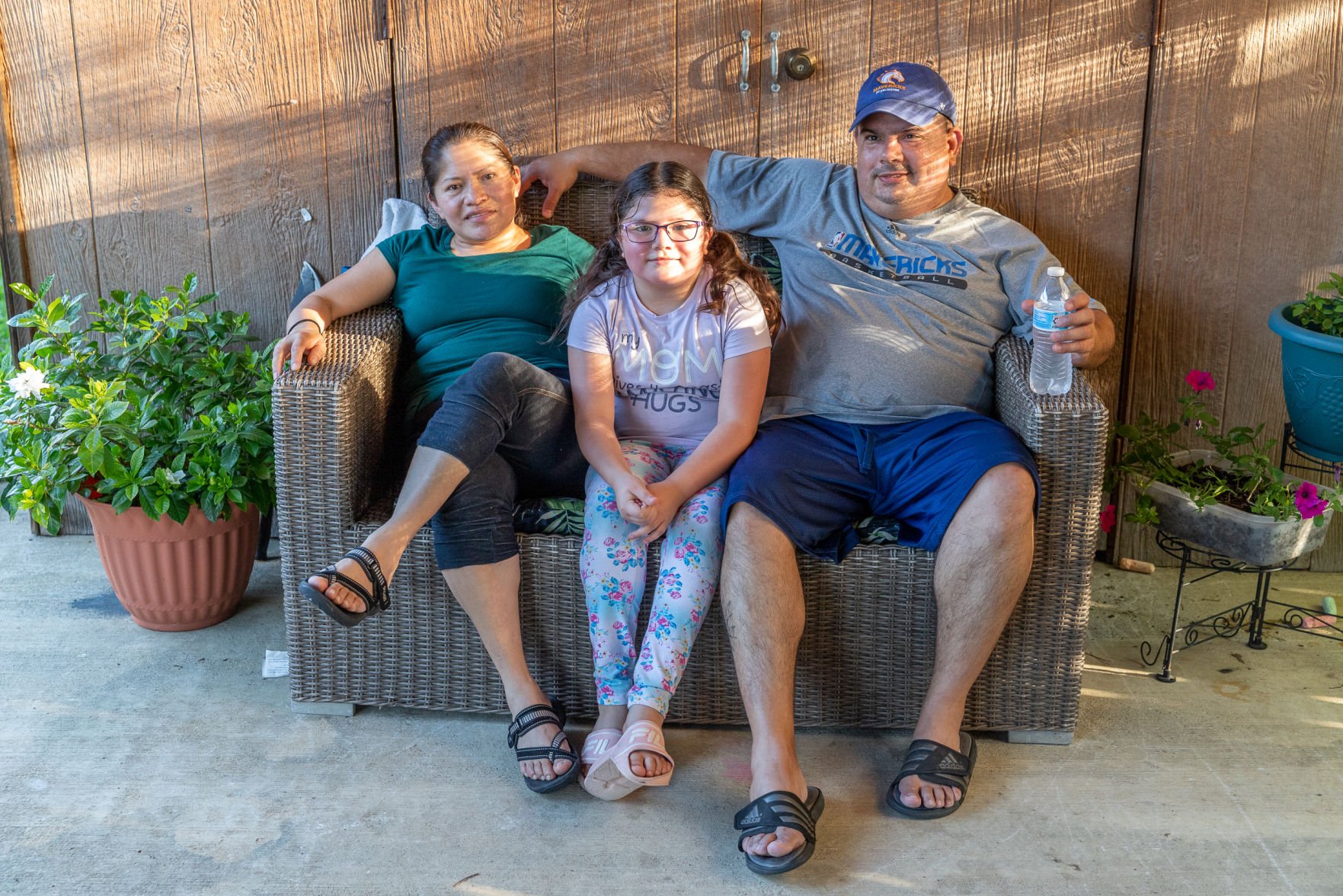 Arlington resident Sergio Esparza, right, sits with his wife Anna and their daughter Gaby, 8, on May 19 in Arlington. Esparza works as a custodian at UTA and worries about being exposed to COVID-19 and bringing it home to his family. 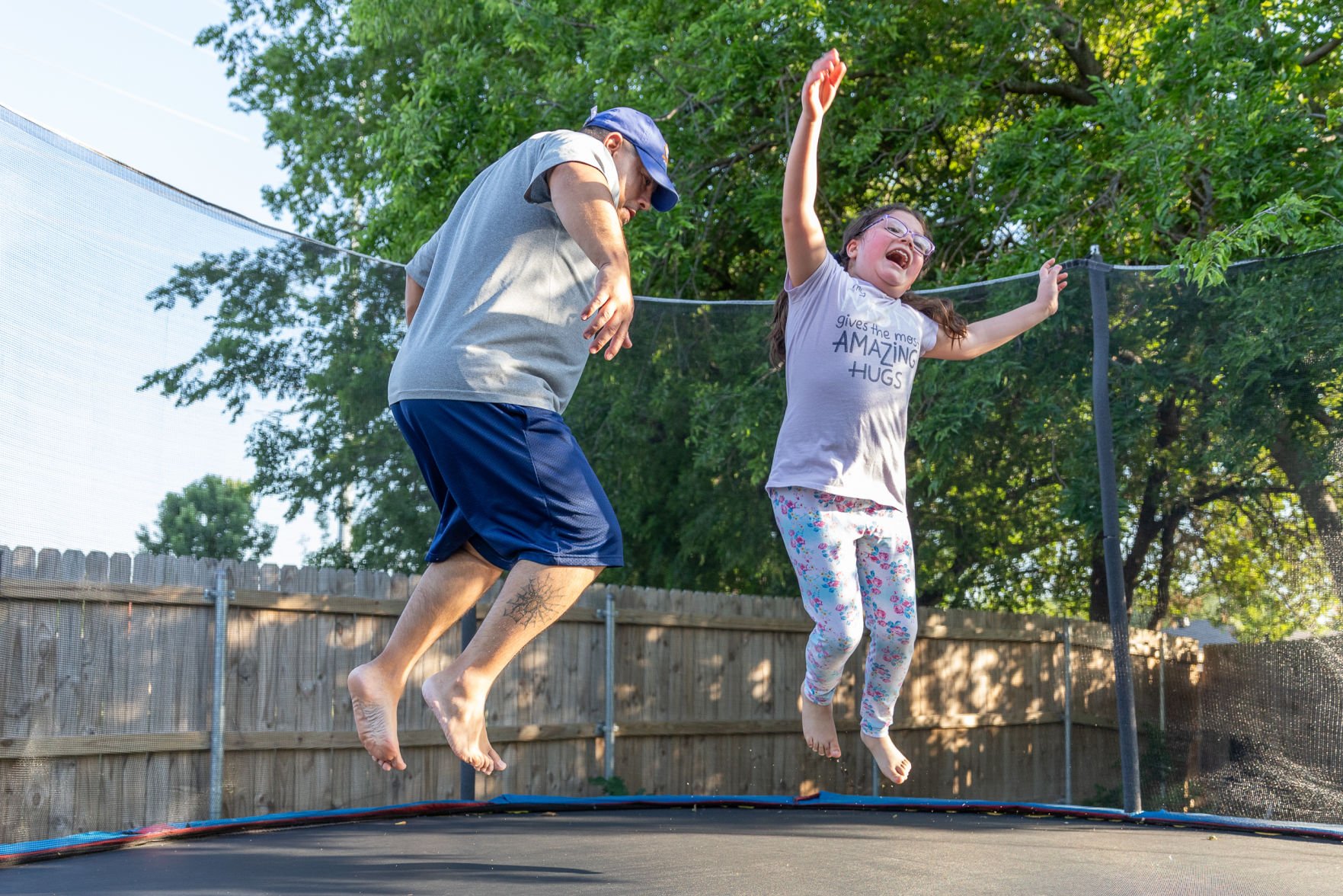 Arlington resident Sergio Esparza jumps on a trampoline with his daughter Gaby, 8, at their home May 19 in Arlington. Esparza takes precautions when he returns from work to prevent the spread of the virus.

For over a decade, Pablo Abac has pushed an ice cream cart down the streets of Irving while ringing a set of bronze bells as the local paletero.

The Dallas resident has made a living by frequenting the same neighborhoods, schools and parks for years; however, that has changed due to COVID-19.

He recently returned to work after being laid off for two months because of the stay-at-home order. Abac now sees a decrease in business as his days are met with struggling neighborhoods, deserted schools and silent parks.

Abac is one of many Latinos experiencing the effects of the pandemic on their daily lives. Many across the country are seeing and taking note of the disproportionate impact that COVID-19 is having on Latinos and other minorities.

Sixty-one percent of Latinos said in April that they or someone in their household had experienced a job or wage loss due to COVID-19, compared to 38% of white adults, according to a Pew Research Center survey.

Multiple factors contribute to COVID-19 disproportionately affecting Latinos, but it’s the same factors that have made these communities structurally vulnerable even before the pandemic, said Isabel Montemayor, UTA anthropology assistant professor.

These communities don’t have access to health care or health insurance, Montemayor said. They often live in overpopulated areas or in small apartments with multiple people, and many of them have to continue working in order to survive.

In a letter sent Monday, Austin City Council members urged Gov. Greg Abbott to address the disproportionate impact the virus has had on Latinos in Texas.

The letter stated that 64% of COVID-19 hospitalizations in Austin were Latinos earlier this month, despite Latinos making up only 35% of its population. According to the letter, it’s because Latinos and other people of color are “overwhelmingly working on the front lines.”

The council asked Abbott to expand Medicaid, use the Economic Stabilization Fund to provide financial relief to working-class families regardless of immigration status, and nullify the SB4 “Show Me Your Papers” law, among other things.

“Inaction on protecting people of color from COVID-19 is an affirmative decision to perpetuate racial injustice,” the letter stated. “It is a decision that will cost lives.”

In Arlington, the number of deaths related to COVID-19 has predominantly consisted of Hispanic individuals, Fire Chief Don Crowson said Tuesday during a city council meeting. The city has focused its efforts on helping its vulnerable populations, which includes underserved communities that don’t have health care or are non-English speaking.

For Arlington resident Sergio Esparza, working as an essential worker under the stay-at-home order brought fear — fear of leaving his children at home since COVID-19 closed schools, and fear of exposing himself and his family to the virus.

Esparza, who works as a custodian at UTA, said even now he leaves to work and carries an unsettling feeling with him throughout the day.

He understands the importance of his job and feels lucky because the alternative could have been losing his job. However, he finds himself feeling frustrated at times because of the circumstances.

Nearly a quarter of employed Latinos are working in service industry jobs compared to 16% of whites, according to the U.S. Bureau of Labor Statistics. Latino workers, which account for 17% of total employment, make up 53% of agricultural workers.

Montemayor said people see outbreaks in places such as meat processing plants because companies aren’t taking the necessary precautions to protect their employees.

Nineteen states reported COVID-19 cases among U.S. workers in 115 meat and poultry processing facilities, according to a Centers for Disease Control and Prevention morbidity and mortality weekly report on May 8.

Among the about 130,000 workers at the facilities, 4,913 cases and 20 deaths occurred, according to the report. Factors contributing to the risk of infection include difficulties with workplace physical distancing and hygiene, and crowded living and transportation conditions.

It’s a luxury to be able to work from home, Montemayor said. However, for those who need to continue working, they are putting their lives at risk as well as their family’s.

Latinos and other minorities often find themselves working in the service industry because of a lack of education, she said. While these jobs offer good benefits, nobody expects to work during a pandemic under these conditions.

UTA alumnus Daniel Lopez, who graduated in May as a first-generation college graduate, said working under the stay-at-home order had him and his family concerned about on-the-job protections provided by their employers.

Montemayor said she has noticed a lag in information and lack of severity put on the coronavirus, especially with the Spanish-speaking Latino community.

She has also seen inaccuracies in information provided by businesses to customers which have resulted in some members of this community treating COVID-19 like a cold instead of something much more serious.

Abac, who now worries about how he will pay rent and how he will help provide for his family in El Salvador, said he has not talked to his family about the dangers associated with the coronavirus because it’s something he would not like for them to deal with.

Lopez said his family has taken time to talk about COVID-19, particularly because his niece is considered at-risk.

Esparza, who recently took time off to be home with his children, said he has had to trade in the hugs and kisses from his 8-year-old daughter with a shower after coming home from work. Both he and his wife decided to take this precaution in order to prevent bringing COVID-19 to their home.

There are other sectors of society, aside from health care professionals, that have kept everyone afloat during the pandemic, Montemayor said. It includes individuals working in the grocery stores and meat packaging plants, people working in the fields and people driving public transportation vehicles.

“You can't run a society without all of those individuals — we would fall apart,” she said.

In a time where businesses are reopening without a COVID-19 vaccine, Montemayor said her worry is the continued exposure of the virus as well as the lack of access to resources that minority populations have already proven to have.

“If we look at how they've been affected thus far, we don't really have to wait for the results,” she said. “We know what's been happening, and it's only gonna continue to happen until we have a cure or we have a stable treatment.”

These issues include providing equal protections, treatment and justice under the law, addressing deficiencies in current policing standards and more.