Skip to main content
You are the owner of this article.
Edit Article Add New Article
You have permission to edit this article.
Edit
Home
Coronavirus
News
Life+Entertainment
Opinion
Sports
Multimedia
DESIGN
EXTRAS
1 of 16 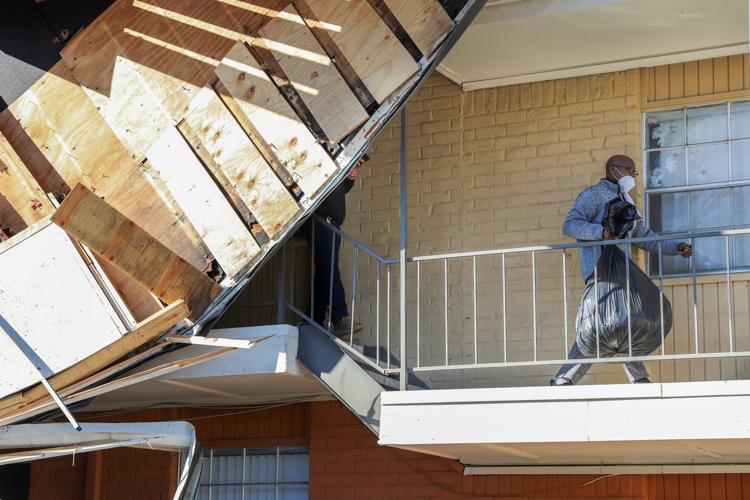 A resident exits with his belongings at the Waterdance apartments following a tornado the previous night in Arlington. Some residents were allowed to be escorted to their residence by apartment complex staff Nov. 25. 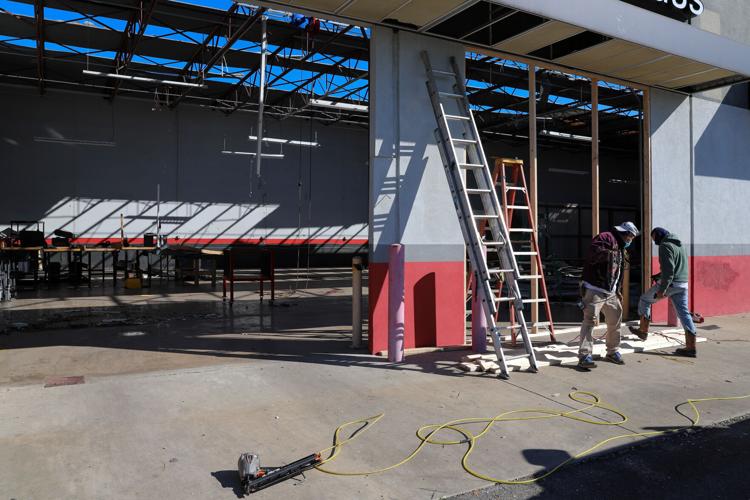 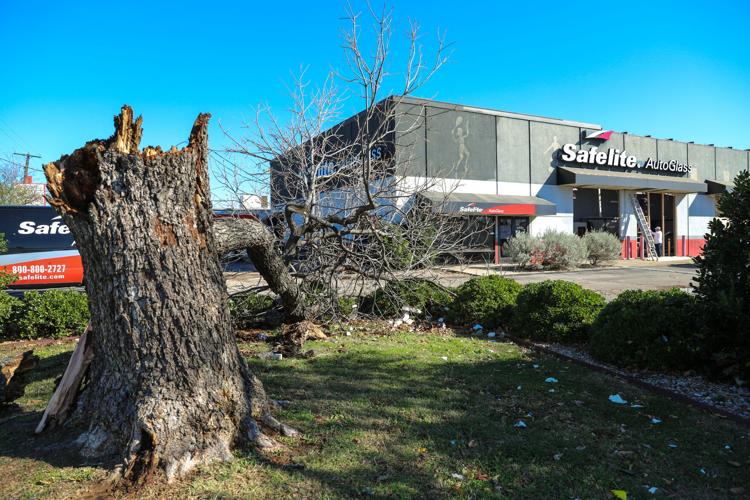 A tree lays on the ground Nov. 25 after it was snapped during a tornado the previous night outside a Safelite AutoGlass in Arlington. Crews worked to place boards on broken windows and doors. 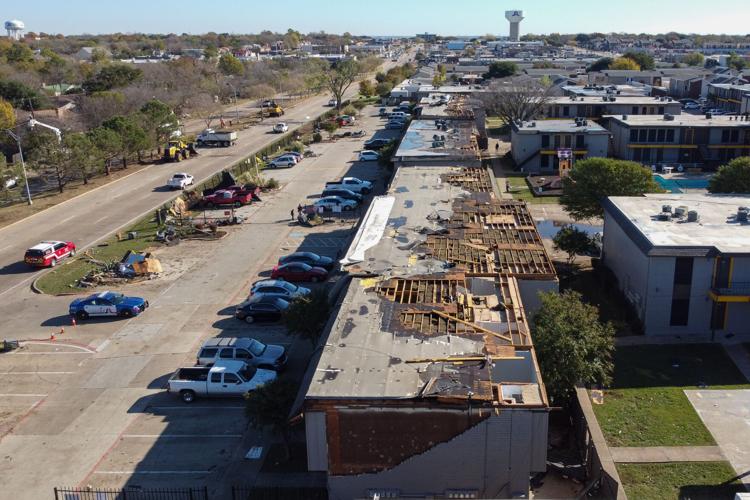 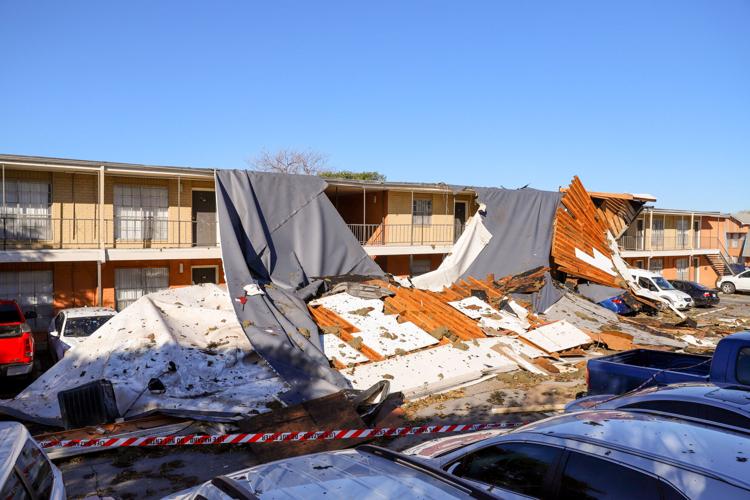 The roof of a building sits on several cars after being pulled off during a tornado the previous night at the Waterdance apartments on Nov. 25 in Arlington. Crews were beginning to place fencing and clean up the damage. 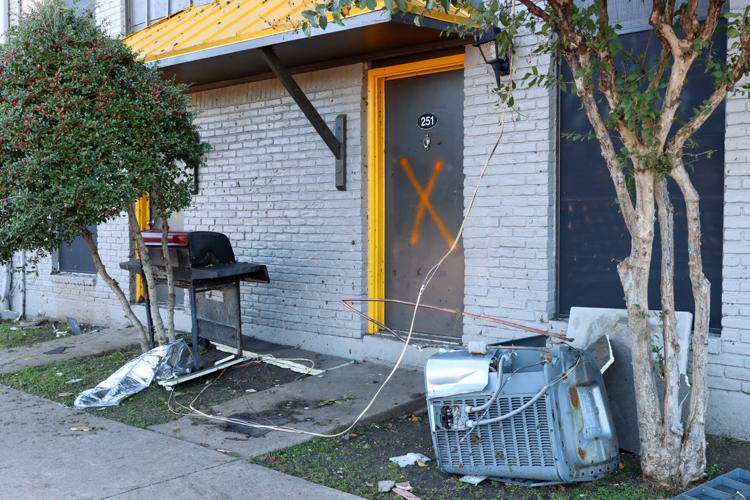 An air conditioning unit along with other debris sits on the ground Nov. 25 after a tornado the previous night in Arlington. City of Arlington crews worked to clear Pioneer Parkway of downed trees and other damage. 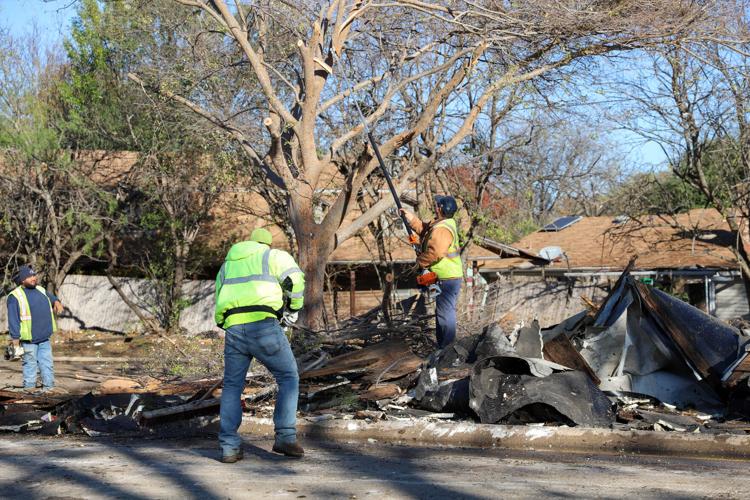 City of Arlington street crew members work to clear downed branches and other debris Nov. 25 along Pioneer Parkway after a tornado moved through the previous night in Arlington. Damage was visible at several apartment complexes including the Mirage apartments. 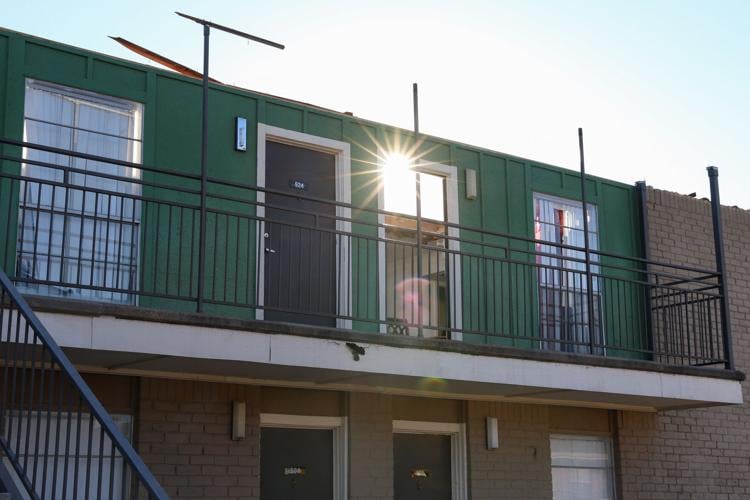 The sun peeks through an exposed building Nov. 25 after the roof was pulled off during a tornado the previous night in Arlington. There was roof damage to several buildings at the Waterdance apartments as well as the Mirage apartments along Pioneer Parkway. 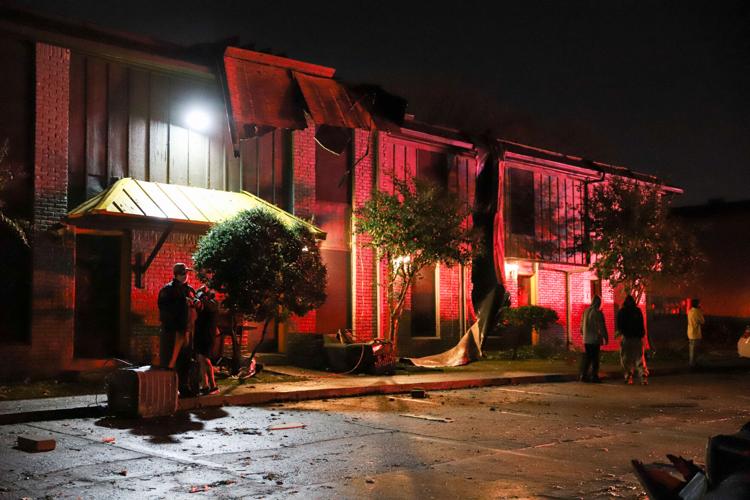 Residents stand outside a building following a tornado at the Mirage apartments on Nov. 24 in Arlington. Outdoor warning sirens were turned on and later turned off after the storm rotation diminished. 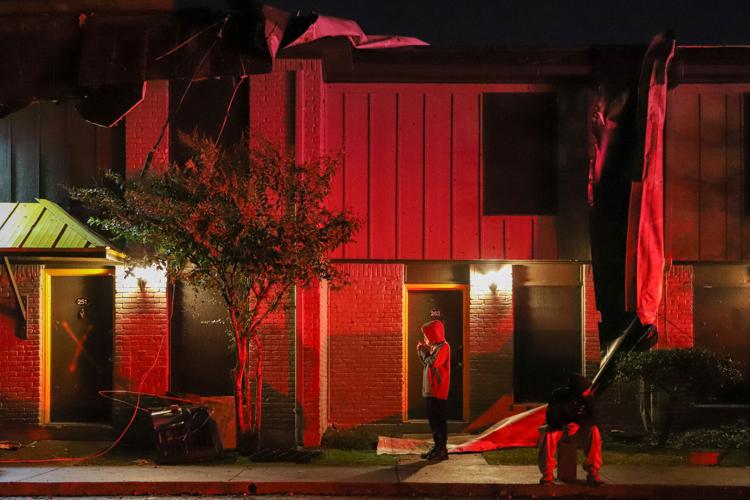 Arlington residents Kobe Bennett, left, and his father William Simmons wait outside their apartment following an EF2 tornado Nov. 24 in Arlington. Bennett said he made a split second decision to climb underneath his bed when he noticed the roof was being peeled off the building. 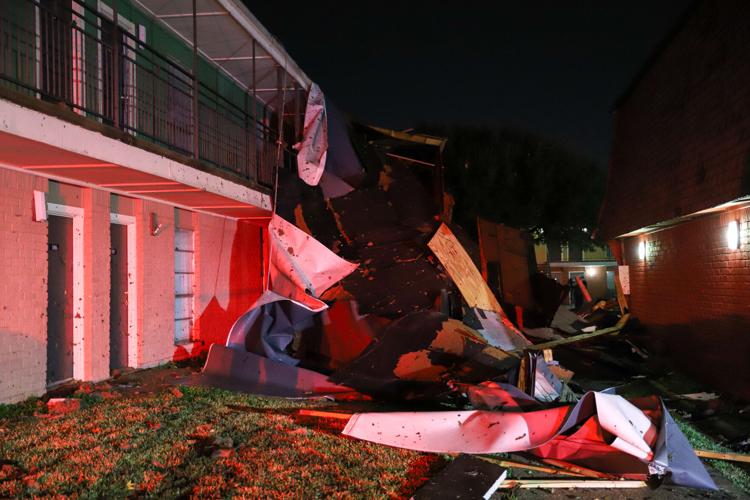 The roof of an apartment building at the Waterdance apartments sits in the courtyard after being peeled off during an EF2 tornado Nov. 24 in Arlington. Police and firefighters responded to multiple reports of collapsed buildings in several locations. 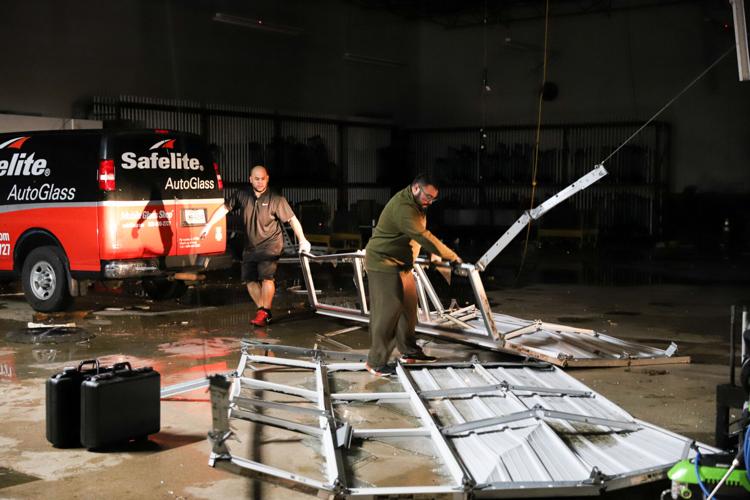 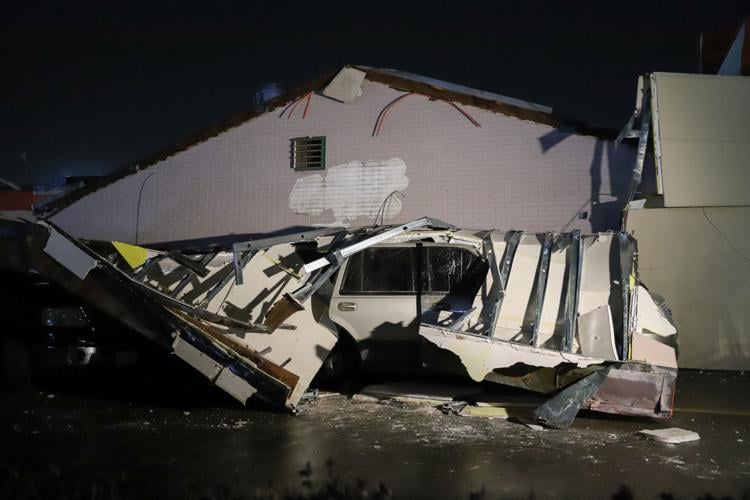 A vehicle sits underneath a pile of debris after a partial roof collapse at a Burger Box following an EF2 tornado Nov. 24 in Arlington. The vehicle was occupied when the awning collapsed, but the people inside were not injured. 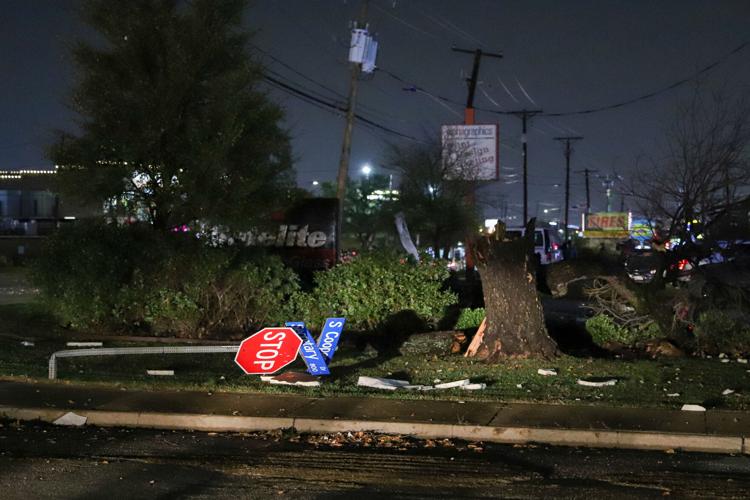 A stop sign and tree lay on the ground after being toppled over following an EF2 tornado Nov. 24 in Arlington. Debris from the storm was scattered along Cooper Street and nearby parking lots. 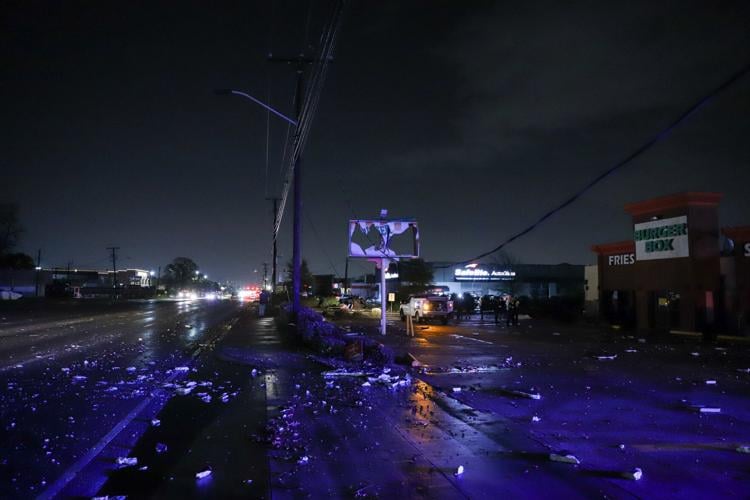 Debris fills the parking lot and Cooper Street outside a Burger Box following an EF2 tornado Nov. 24 in Arlington. Part of the roof and awning at the Burger Box collapsed on two cars that were occupied in the drive thru, but no injuries were reported. 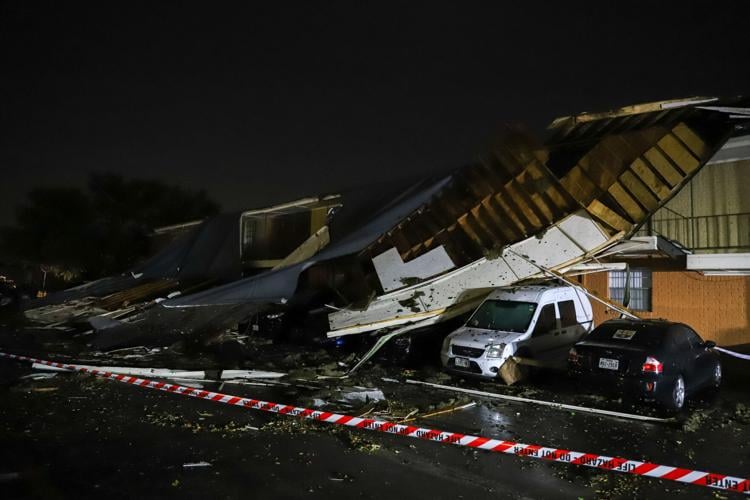 A damaged building is marked off with caution tape at the Waterdance Apartments following a storm Nov. 24 in Arlington. Police are assisting the fire department with damages including various roof collapses on some structures.

Crews were out Wednesday morning to survey the damage and clean debris from the storm. The American Red Cross will be assisting residents displaced by damage at the Waterdance apartments, Mirage apartments and Garden Park apartments, according to the City of Arlington.