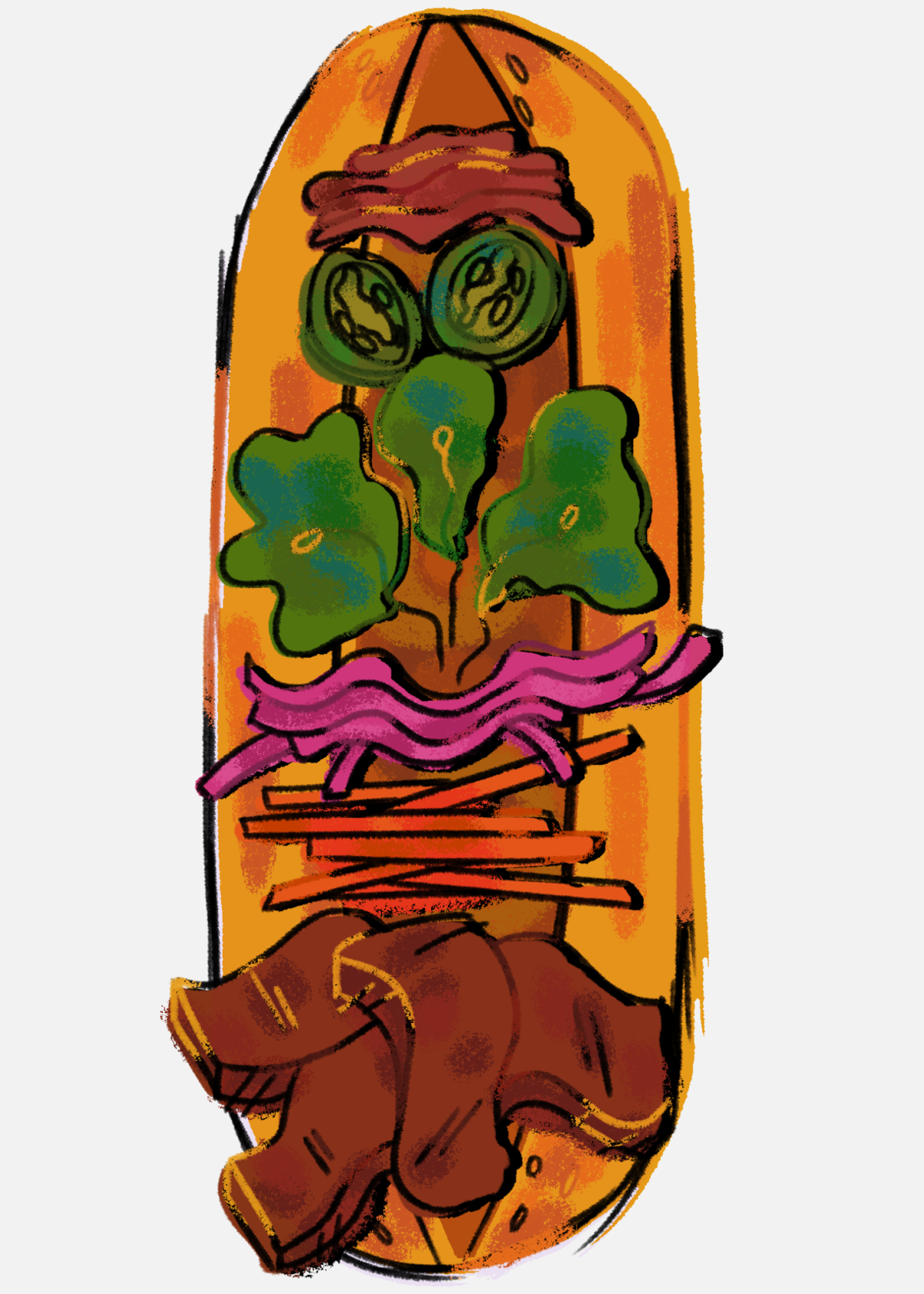 Marrying Vietnamese tradition with French influence, the bánh mì sandwich has evolved and grown in prominence in America since it was created in Vietnam.

From humble beginnings, the bánh mì sandwich is ever-changing, with new variations being created daily, said Andrea Nguyen, author of The Banh Mi Handbook and cooking teacher. It also serves as a bridge between cultures.

Within the bánh mì sandwich lies a deep history of French colonialism and a distinct combination of flavors between France and Vietnam. The French baguette would serve as a blank canvas for a variety of colorful ingredients to create the sandwich.

With what looks like an endless sea of ingredients to choose from, biology junior Kim Szeto said she usually chooses a simple mix of deli meats, pâté (a spreadable French paste made of ground meat and herbs that often contains liver), pickled vegetables and tops her bánh mì sandwich with a fried egg.

“It’s just very compact and very easy to eat,” Szeto said. “It’s a comfort food — everything is all in one bite.”

In Vietnamese, the word bánh mì has two different meanings. Bánh mì can refer to the baguette itself or to describe the actual sandwich. Bánh mì, the bread, is used to make bánh mì, the sandwich.

Because of its high popularity, most people started to use the term as a shortcut to mean the bread itself, Nguyen said.

There are two main types of bánh mì sandwiches: Northern-style bánh mì and Saigon-styled bánh mì, Nguyen said. Northern-styled bánh mì is more plain and contains butter, salt and pepper, pâté and the occasional cucumber and cilantro. As opposed to Saigon-styled banh mi — the one that most people know abroad — with pickled vegetables, mayonnaise, cucumber, herbs and chili, Nguyen said.

Nguyen said a traditional bánh mì sandwich starts with a French-style bread with a hard outer shell to house the contents inside. The bread is sliced down the middle to reveal a soft, cream-colored flesh. The insides are then lined with a thin layer of mayonnaise and pâté.

Next arrives the protein, which can range from Vietnamese cold cuts, grilled pork, chicken or even tofu, Nguyen said. Accompanying the meats are julienned pickled daikon and carrots, cucumber slices and jalapeno. The concoction is then sprinkled with soy sauce and cilantro.

“Then you close the whole thing up,” Nguyen said. “It’s practically like a salad in a sandwich.”

There are numerous variations of the bánh mì sandwich, especially in the United States where it has flourished and had the opportunity to evolve to different tastes, Nguyen said.

One variation of the bánh mì sandwich is bánh mì ốp la, which is fried egg bánh mì. Warm fried eggs are folded neatly into the bread and is typically served at breakfast time, Nguyen said.

Although there are countless variations of the sandwich, the one constant in the bánh mì is the bread, Nguyen said.

“You can feature anything in that bread,” Nguyen said.

For bánh mì to work, the bread has to be light and simple because there is a myriad of ingredients inside of it, Nguyen said.

But where these ingredients came from derives from bánh mì’s unique history of French and Vietnamese culture being tossed together, all starting with a piece of bread.

France, after the defeat by the British in the Seven Years War in 1763, switched their focus to Vietnam in search of lucrative resources and sent their own missionaries to Vietnam under the pretext of missionary work, associate history professor Joyce Goldberg said.

During the occupation of Vietnam, the French brought over their language, culture and foods such as bread, coffee and cheese.

When France was forced to leave Vietnam in the summer of 1954, one thing they left behind would play a crucial role in the creation of bánh mì: the French baguette.

Nguyen said although the French introduced the French style of baguettes, making them in a humid climate like Vietnam proved to be difficult.

“But Vietnamese and Chinese bakers pulled it off,” Nguyen said.

The cultural blend gave birth to the Vietnamese baguette, complete with a lighter and thinner crust that cracks more easily to the touch. The baguette in its infancy was eaten by itself as a snack and usually served for a light breakfast or lunch, Nguyen said.

Then, came an idea.

Bánh mì vendors in Saigon began experimenting with the plain baguette and began to add in pâté, head cheese — a thin cut of meat, not dairy — various cold cuts, mayonnaise and sometimes butter.

Mayonnaise was more frequently used because of its simple ingredients of eggs, oil and lemon juice, Nguyen said. And thus, bánh mì climbed to its next evolutionary stage.

After the reunification of Vietnam in 1975, Saigon became no more and was renamed to Ho Chi Minh City. As communism began its spread throughout Vietnam, a mass exodus of war-stricken citizens, mainly from South Vietnam, fled to America and other European countries to escape communist persecution and the aftermath of the Vietnam War.

Many left the country with only their memories and the clothes on their backs, Nguyen said. When Vietnamese immigrants settled in their new homes, they brought their ideas, culture and food — sharing bánh mì with the world.

For some, the sandwich is seen as a symbol of Vietnamese culture and its possibilities, Nguyen said. What started out as an empty loaf of bread has turned into a rich cornucopia of ingredients from two distinct cultures. And with every bite, a piece of Vietnamese history is consumed.

“Bánh mì doesn’t stop, it’s not a fixed food, just like all Vietnamese food” Nguyen said. “Vietnamese culture is very dynamic, and it’s changing all the time. Something like bánh mì is a great way for people to explore what being Viet is and what Viet culture is.”

Szeto recalls having her first bánh mì sandwich at the age of three in Vietnam from a street vendor.

She came to the United States at the age of seven and continues the tradition of eating bánh mì, buying them from specialized bánh mì shops. Although she loves them, she prefers the ones made from scratch by her aunt, prepared for Szeto whenever she visits.

“She would toast the bread, she would buy the pâté separately and the meat she would roast them,” Szeto said. “All that effort and love put into it — it just makes it better.”