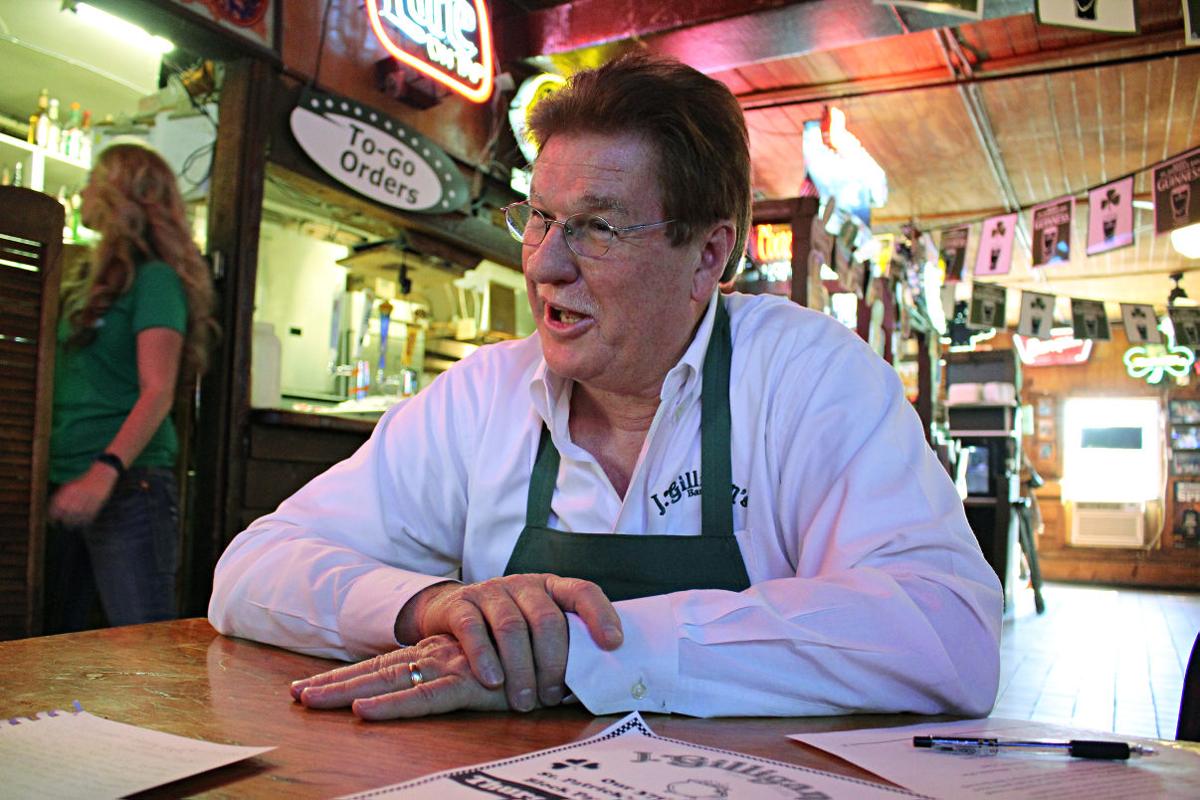 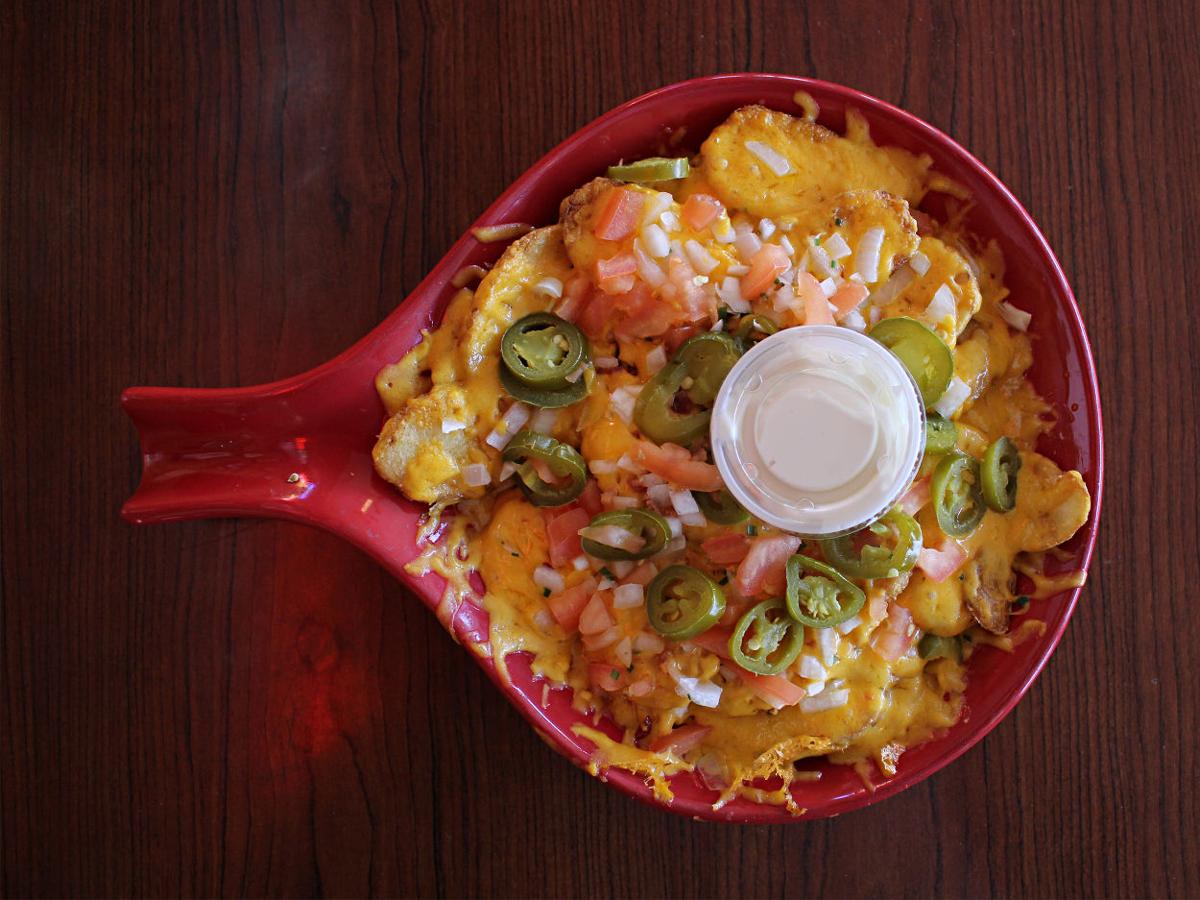 J. Gilligan’s owner Randy Ford created Irish nachos in 1980 when he was experimenting with different types of fries in his fryer. The popular dish — made with cottage fries topped with cheese, tomatoes and jalapeños — was featured in Food Network's show called "Top 5 Restaurants." 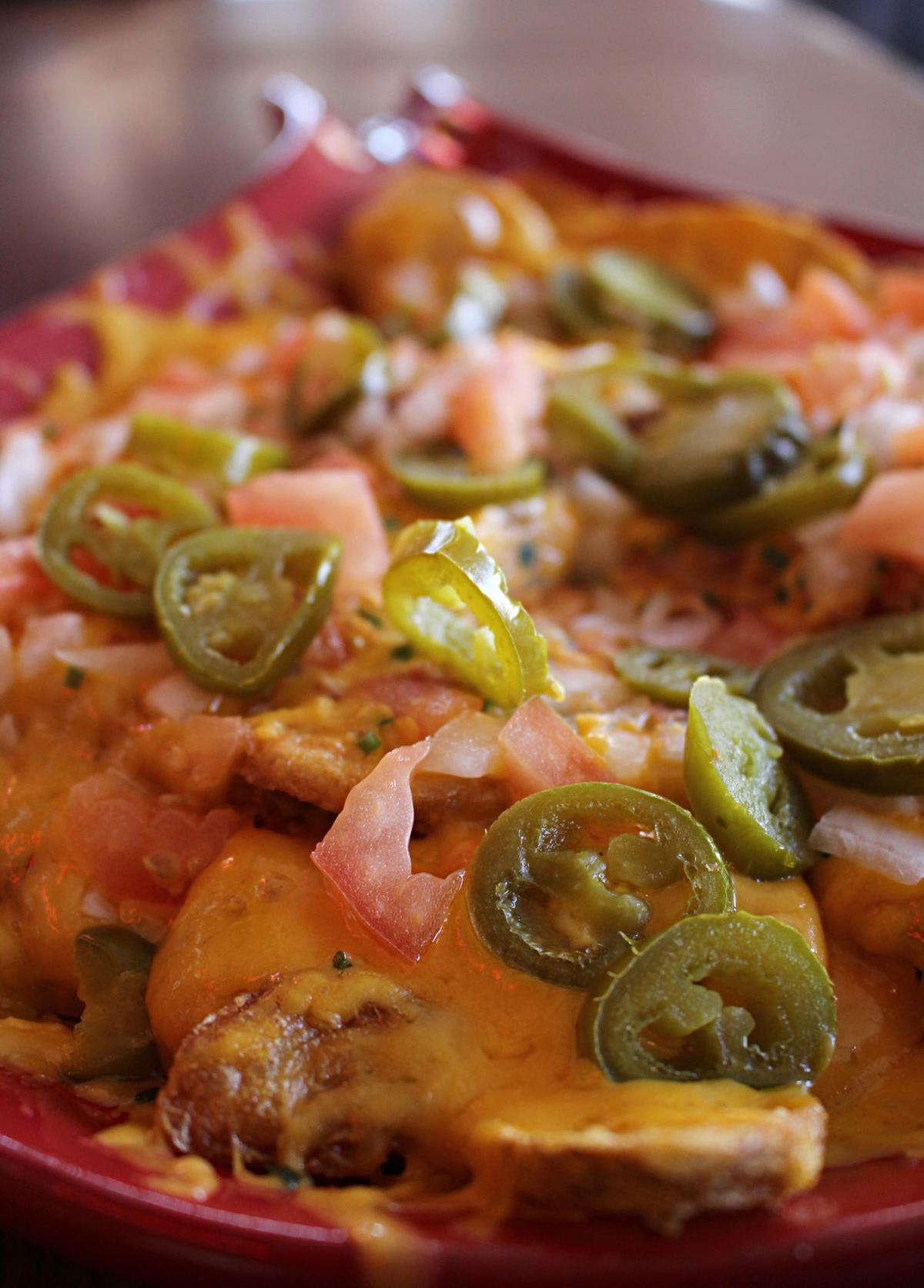 Natural-cut cottage fries covered in melted cheddar cheese mixed with bacon, chives, onions, tomatoes and jalapeños with sour cream on the side make up the Irish Nacho dish at J. Gilligan's. The beloved dish was featured on Food Network's show called 'Top 5 Restaurants'.

J. Gilligan’s owner Randy Ford created Irish nachos in 1980 when he was experimenting with different types of fries in his fryer. The popular dish — made with cottage fries topped with cheese, tomatoes and jalapeños — was featured in Food Network's show called "Top 5 Restaurants."

Natural-cut cottage fries covered in melted cheddar cheese mixed with bacon, chives, onions, tomatoes and jalapeños with sour cream on the side make up the Irish Nacho dish at J. Gilligan's. The beloved dish was featured on Food Network's show called 'Top 5 Restaurants'.

Matthew McLemore has been eating Irish nachos from J. Gilligan’s Bar and Grill for as long as he can remember.

The organizational communication senior was about four years old the first time he had the potato nachos — a twist on the well known Mexican dish — smothered in cheese, onions, tomatoes and jalapeños. He went with his mom, aunt and grandmother after a softball game. His aunt and uncle met at UTA and have been going to Gilligan’s since they were in college. For the McLemores, going to Gilligan’s is a family affair.

“Some of my earliest memories are me toddling around that place,” McLemore said. “I was fed Irish nachos from day one.”

Most Arlington residents are familiar with J. Gilligan’s and the famous Irish nachos. J. Gilligan’s opened in 1979 and began serving Irish nachos in 1980, when the restaurant got their first deep fryer, owner Randy Ford said. The nachos have been featured on the show “Bar Food Paradise” on the Travel Channel, ESPN U and “Top 5 Restaurants” on Food Network. The episode re-airs at 5:30 p.m. Saturday on the Food Network. Ford said the opportunity to have exposure on these national shows has been great.

“You cannot buy advertising like this, and if you could, you couldn’t afford it,” Ford said.

Ford said there were six or seven customers, just that day, who mentioned seeing the dive (and the nachos) on the Food Network. Ford said that February is the slowest month of the year for most restaurants. Some pick up a little business on Valentine’s Day, but he said that's the exception. When the episode first aired Feb. 3, Ford said there was a buzz that started a domino effect, and people have been asking about the nachos they saw on TV.

Ford created the nachos in 1980. When J. Gilligan’s got their fryer, they experimented with different fries – crinkle fries, waffle-cut fries, McDonald’s style fries and cottage-cut fries. Ford served them to customers in baskets until the baskets ran out; that’s when he put the cottage fries in a nacho skillet. He said he noticed a resemblance to nachos and began to add cheese, tomatoes, onions and jalapeños on top of the cottage fries.

J. Gilligan’s serves all kinds of nachos, but Ford said the potato nachos have been the favorite so far. Even though the Irish nachos have been around for 36 years, they’ve recently gained attention from food shows and “foodies."

Ford said Food Network reached out to him via email and expressed interest in having J. Gilligan’s on “Top 5 Restaurants.” After a few phone calls, an interview with producers and some paperwork, the Irish nachos were featured on the best bar foods episode.

“I was just thrilled. To be on the Food Network? A little one-horse bar and grill in Arlington, Texas, on the Food Network, I was thrilled to death,” Ford said. “People are proud of that. It’s quite an honor to be on one of those shows.”

Waitress Claire Edwards said because of the shows, people from all over the United States come in to try Irish nachos. Edwards said people have lived in Arlington their whole lives and have never heard of J. Gilligan’s until they saw it in the shows.

“I love it though, it’s good for Gilligan’s,” Edwards said. “It’s done really well for us. It makes us proud, too.”

McLemore said he’s had the nachos more times than he cares to admit. One time he went with a friend who had never had them before. That day, his friend ate four orders of the Irish nachos within eight hours, he said.

As an Arlington native, McLemore loves that the restaurant has gotten so much exposure.

“It really is one of the best old Arlington restaurants,” he said.