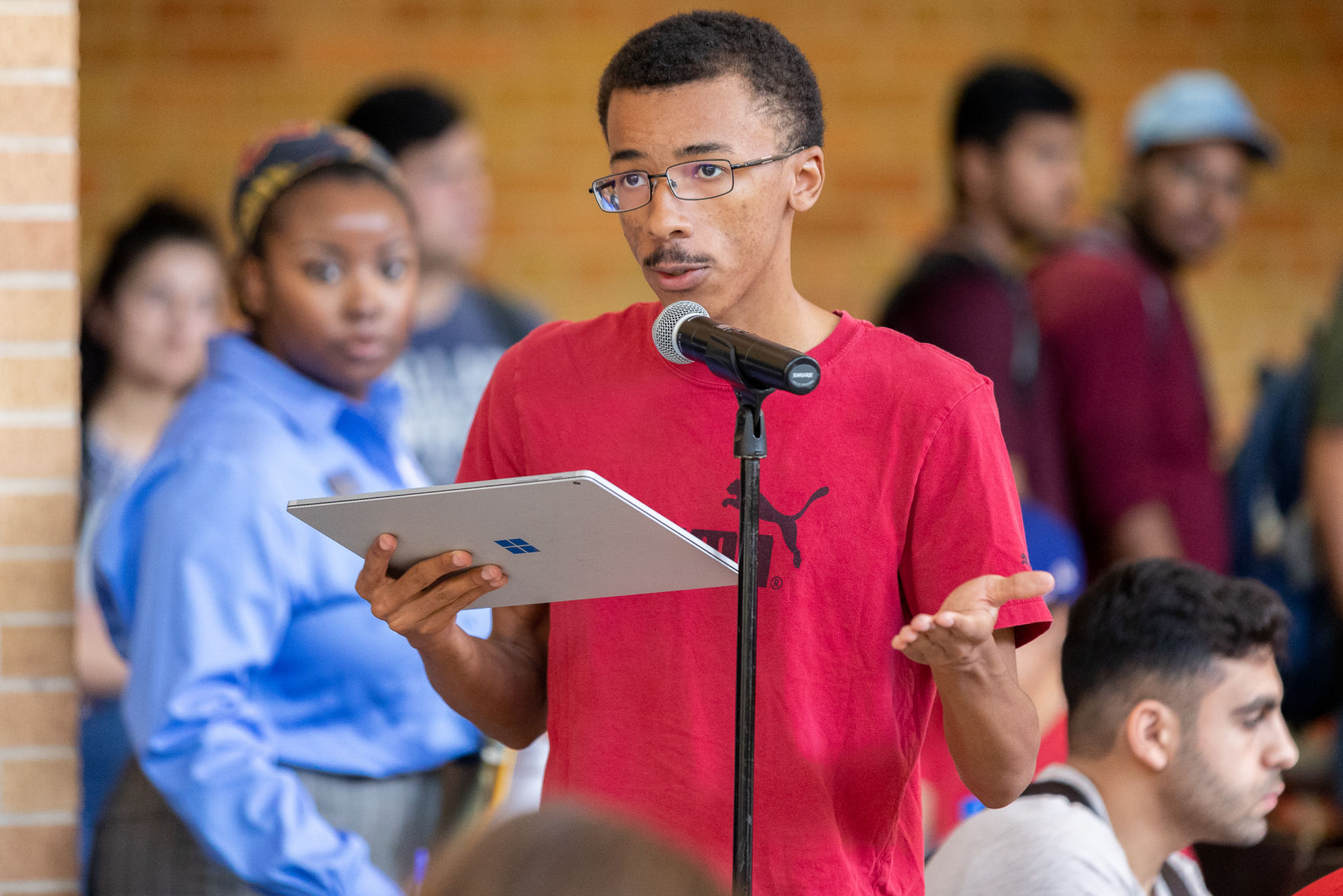 Physics junior Julian Beatty asks a question during Pizza with the President on Sept. 18 in the University Center. Beatty asked multiple questions during the event. 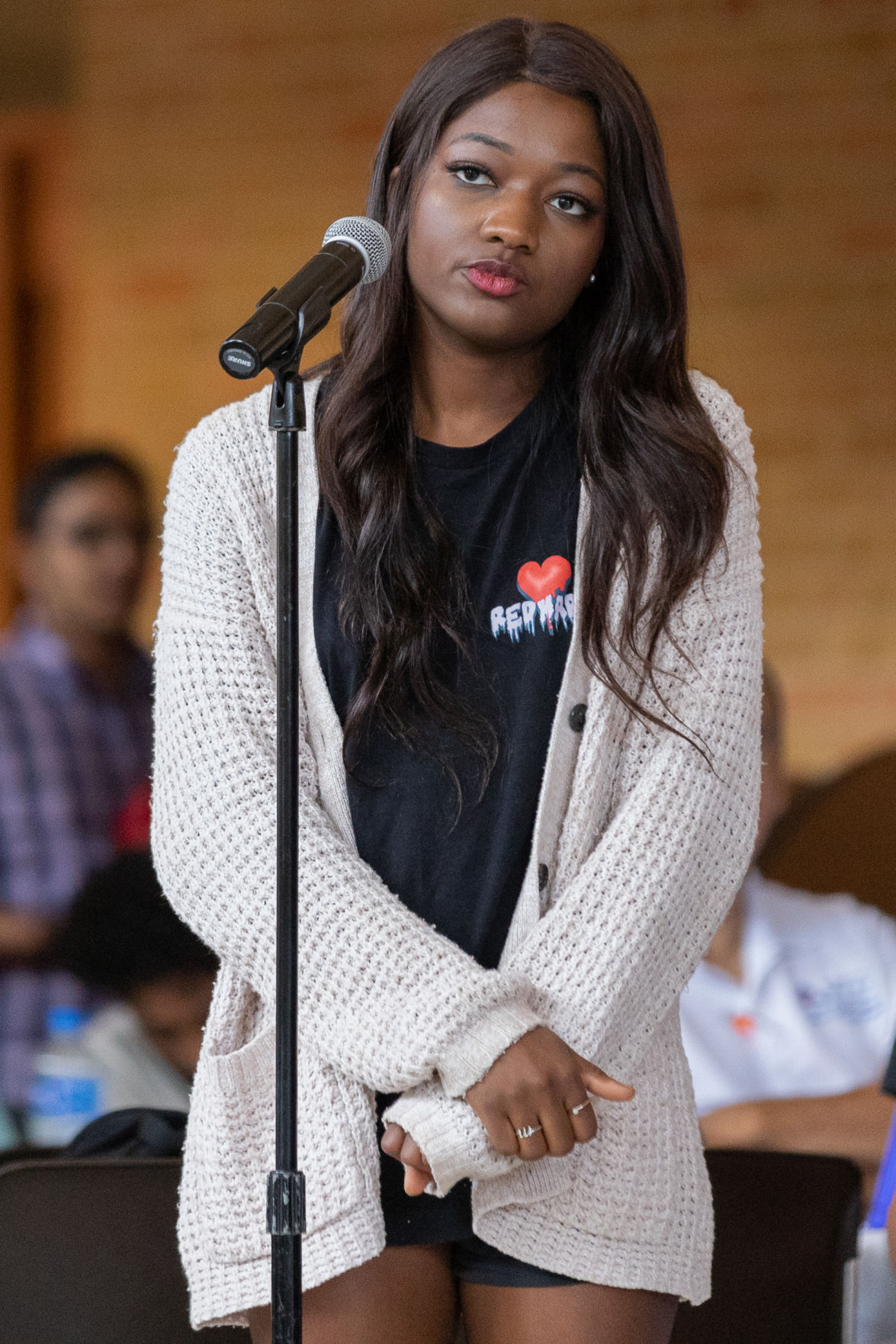 Mariah White, critical languages and international studies-Korean senior, listens as President Vistasp Karbhari answers her question during Pizza with the President on Sept. 18 in the University Center. Students were encouraged to ask the president about any issues they would like to have addressed. 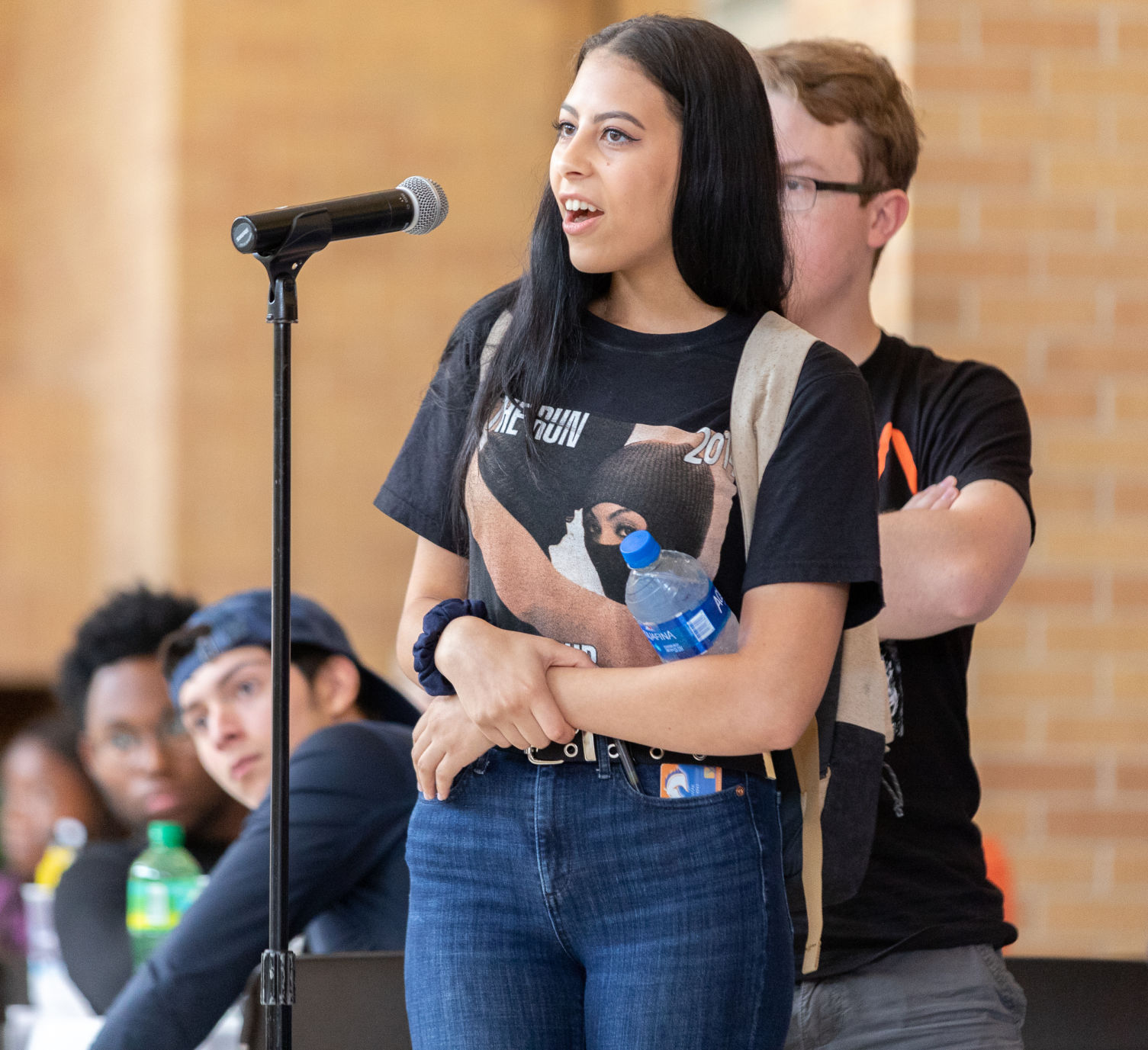 Nursing junior Sarah Jankowiak asks a question during Pizza with the President on Sept. 18 in the University Center. Jankowiak asked about improving the disconnect she experienced between exam materials, teachers and advisers. 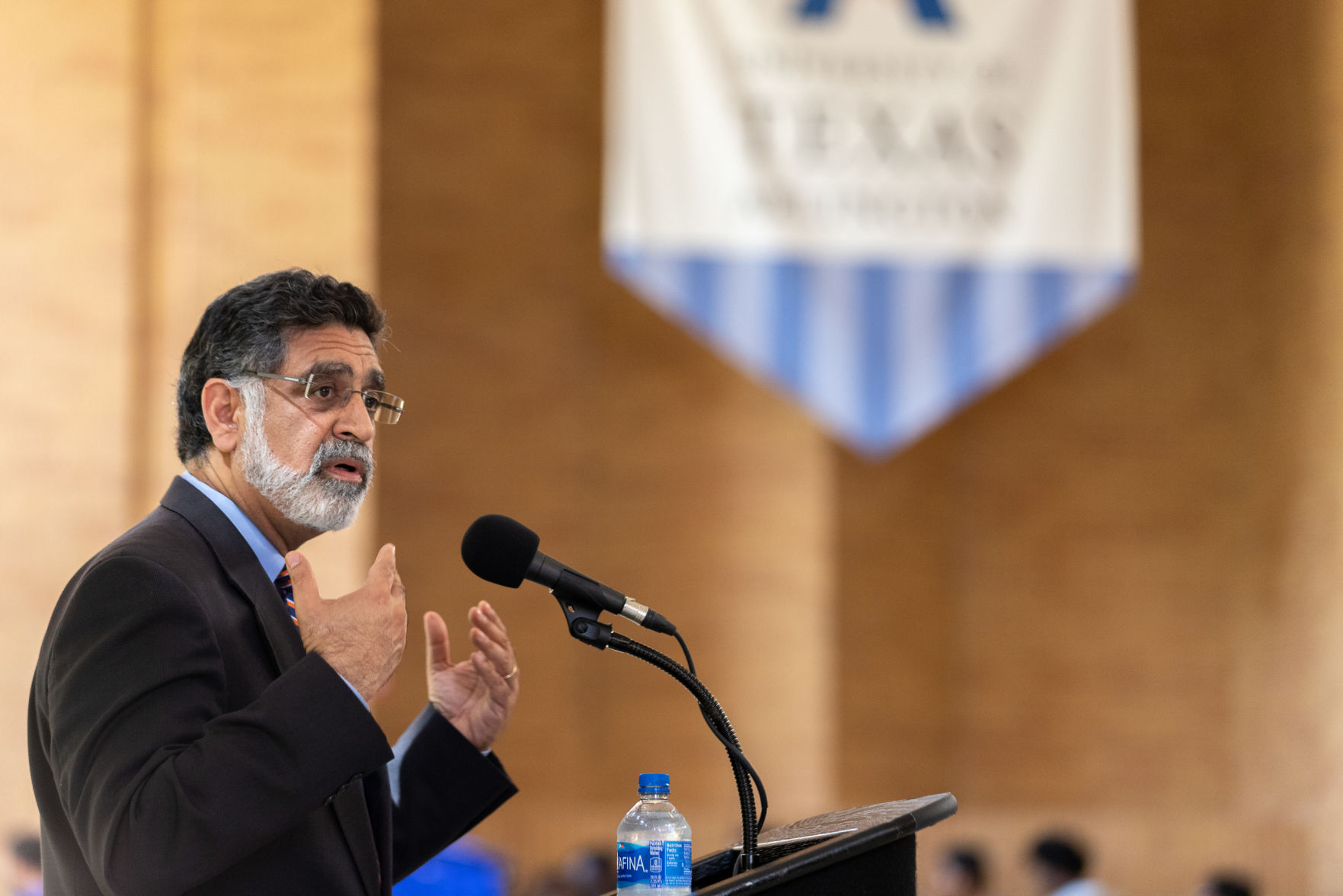 Physics junior Julian Beatty asks a question during Pizza with the President on Sept. 18 in the University Center. Beatty asked multiple questions during the event.

Mariah White, critical languages and international studies-Korean senior, listens as President Vistasp Karbhari answers her question during Pizza with the President on Sept. 18 in the University Center. Students were encouraged to ask the president about any issues they would like to have addressed.

Nursing junior Sarah Jankowiak asks a question during Pizza with the President on Sept. 18 in the University Center. Jankowiak asked about improving the disconnect she experienced between exam materials, teachers and advisers.

President Vistasp Karbhari addressed the campus community and answered students’ questions and concerns during the first Pizza with the President of the semester in the University Center Palo Duro Lounge on Wednesday.

Karbhari addressed the audience and asked about their thoughts on how the university can improve on the registration process.

Mariah White, critical languages and international studies-Korean senior, asked Karbhari if the university plans to update the online degree map that is available for students. She said the map is not current and doesn’t show the classes within her major accurately.

White said the degree map had determined she would graduate this semester. However, she realized at the start of the semester that it was not accurate, and now she will graduate in the spring.

“It was just kind of disappointing to think something for so long and then it just not be true; something as big as graduation,” she said.

White said it was difficult to let go of the idea of graduating this semester, but she now realizes it just wasn’t meant to be. Regardless, she left her contact information with Karbhari so that he could look into it.

Karbhari said the university is looking into updating all the degree maps and making sure they are current.

Physics senior Julian Beatty said he comes to Pizza with the President to see where the administration stands on university issues.

Beatty said the concern he raised to Karbhari is that the university compromises its ability to grant degrees to students by charging high prices on parking and housing on campus.

He said he values the financial security of current students and having affordable parking and housing, however, students also pay for other services such as intercollegiate athletics and recreational programs.

“We should re-look at our priorities,” Beatty said. “Instead of spending that money on athletics, we should use that to pay down our debt service and to basically subsidize our housing and parking.”

Karbhari said the university keeps students in mind when deciding on rates, and the goal is to provide students with the services they need.

He said the student parking rates remained constant this year, while faculty and staff rates increased. Regarding housing, Karbhari said having both on- and off-campus options allow students to compare rates and decide for themselves.

Student body President Gavin Mitchell said the next Pizza with the President will take place in November.

“I would like to see people prepare questions ahead of time. Not that the questions were bad, but we want to encourage more dialogue and discussion between administration,” Mitchell said.

I understand that some students believe that housing should be subsidized, that parking rates should be lower, that we should re-draw our fees, take them away from under-performing areas that aren't benefiting a lot of people in favor of those that are, etc. but I wonder how many students realize that faculty and staff, regardless of who they are or where they work, have to pay for parking, at even higher rates than students? I wonder if when Dr. K mentioned what he did about faculty and staff getting an increased rate for parking this year if that even landed with the students, if it even caused them to pause for a moment and say "Wait. Our teachers and support staff pay to park?"

I doubt that it did. I say all these things to get at the point that while I'm in alignment with some of the questions asked, the student also has to realize that Dr. K has to balance a lot of competing factors and try to reach the point of keeping debts paid, keeping students happy and engaged, keeping faculty and staff engaged, on top of all the things the state and board of regents for the system throws at him. I think given the information he has, given the duties he is obligated to perform, and given the number of people he is trying to keep relatively happy, he's doing a pretty good job.

Degree maps though...yeah...that's gonna be a tough one. Especially when Fluid gets implemented on October 7th. Then they are really going to be wrong.

LOOKING FOR AN Ophthalmic technician for Advanced EyeCare in Grand Prairie. Hours are between 20-30 a week. Experience is a bonus but not required. dfwoptom2020@gmail.com
Click here to view more classified ads